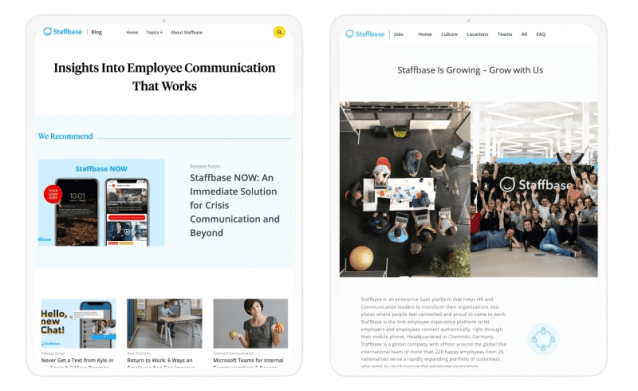 For our client Staffbase from Chemnitz, we have now been able to implement several projects with the Jamstack approach. Statically generated websites such as blog and career pages integrate seamlessly into the ecosystem of the Staffbase website.

WordPress as a headless CMS

Staffbase operates an extensive blog to report on trends in internal corporate communication and the developments of the Staffbase employee app. You will find over 385 blog posts on the blog that play an important role in the company’s content marketing. The blog was originally implemented with the Hubspot marketing software. Besides, the blog is available in both German and English.

Due to various factors such as SEO ranking, optimization of loading times and the modern Gutenberg editor from WordPress, Staffbase decided to move the blog to WordPress. However, the blog itself should be implemented as a static page, so that WordPress was only used as a headless CMS. The implementation took place with the static site generator GatsbyJS. The basis of the framework is React and GraphQl as a data layer.

Dynamic preview despite the static site

Despite the Jamstack approach, an important criterion was to enable a preview function, as the authors are used to. Since we are not using the WordPress theme itself, WordPress’ functions could not be used for this. Therefore we developed a dynamic component that, when called, retrieves the data from the WordPress API and renders it live.

With this approach, it was possible to set up the blog as a statically rendered website and at the same time to provide the blog’s editors with a modern editor such as the Gutenberg Editor. The different language versions of the blog were implemented using the multisite feature in WordPress.

To support its rapid growth, Staffbase is looking for new employees in its seven different locations worldwide in 20 different teams. To accomplish this task, Greenhouse was chosen as the new recruiting platform. Our task was to design and implement a new, attractive careers page that not only lists job offers from Greenhouse and enables an application, but also offers further information on the locations, teams and culture of Staffbase.

To highlight the diversity of the locations and teams and at the same time to present them clearly, we have organized the site according to these two groups. We have also developed a system of icons to present teams and locations recognizably.

Since Greenhouse was not a sufficient source for the desired richness of the page, we selected and integrated an additional headless CMS that provides images and texts and seamlessly combines them with the information from Greenhouse. This makes it possible for employees of the People Experience Team to create and edit all content on the page independently.

To achieve optimal speed, security and reliability, we have also developed a modern static page with the Gatsby Framework for this project. Still, none of the advantages of a dynamic site have to be sacrificed: Any changes to job advertisements in Greenhouse are automatically updated on the site within minutes and authors receive a preview of the site within seconds as they edit images and text. Applications can be sent directly without leaving the page.

The project was completed on schedule and has since enabled a large number of applications.